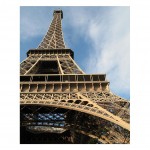 Wrought iron has is so named because it is worked from a bloom of porous iron mixed with slag and other impurities.  The slag is what gives it a “grain” resembling wood.  Wrought iron is a general term for the product and is more specifically used when referring to finished iron goods, as manufactured by a blacksmith.

The other form of iron, cast iron, was first invented in China in the 4th century.  It was introduced into Western Europe in the 15th century.  Due to its brittleness, it could only be used for a limited number of purposes. During the Middle Ages iron was produced by the direct reduction of ore in manually operated bloomeries (iron smelting furnaces).

Before the development of effective methods of steel making and the availability of large quantities of steel, wrought iron was the most common form of malleable iron.  Originally, items made from wrought iron included rivets, nails, wire, chains, railway couplings,  pipes, nuts, bolts, horshoes, handrails,  straps for timber roof trusses  and ornamental ironwork.   A small amount of wrought iron was used as a raw material in the manufacture of steel, which was mainly to produce swords, cutlery and other blades.

In the 17th, 18th and 19th centuries, wrought iron went by a wide variety of terms according to its form, origin, or quality. The Eiffel Tower, for example, is constructed from puddle iron, a form of wrought iron.

Demand for wrought iron reached its peak in the 1860s with the adaptation of  ironclad warships and railways  but then declined as mild steel became more available.  Although steel had been produced by various inefficient methods long before the Renaissance, it wasn’t until more efficient production methods were devised in the 17th century that its use became more common.

Wrought iron is no longer produced on a commercial scale. Many products described as wrought iron, such as balustrades, garden furniture and gates, are actually made of mild steel. They retain that description because they are wrought (worked) by hand.